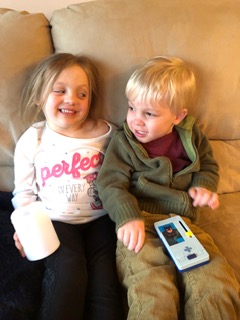 Your intrepid scribe took the week off from blogging to celebrate the Thanksgiving week (my favorite holiday) with family and friends, including cousins Sammy and Werner, a pair of precocious three-year-olds,and to……wait for it…… finish The Reaper!

Against the backdrop of the 1937 Paris Exposition, the Spanish civil war, and the rise of Third Reich, a painting by famed avant garde artist, Joan Miro, goes missing.  Was it destroyed? Or did the Nazi high command, desperate Catalonian nationalists, a pugnacious museum curator or an American industrialist steal it?  Francois Picard, a timid security guard thrust into the middle of the maelstrom, attempts to manipulate the chaos for his own profit so that he, and his imagined girlfriend, Monique Fontenot, can immigrate to America and escape the impending war.

Seventy years later the missing painting spills into the world of Hamilton Blethen, a struggling artist from Saint Paul, Minnesota, and his assistant and lover, Toni Chapereaux.  Blethen’s estranged mother, Magnolia Kanaranzi, arranges to have her unsuspecting son forge The Reaper to mollify her guilt, but the forgery becomes intertwined in her scheme to control a media empire, resulting in murder and mayhem. Discovery of the painting (or is it a forgery?) puts Blethen and Chapereaux, on a collision course with Kanaranzi, from which only one will survive.

The Reaper is the first book of a trilogy that pits mother against son, testing the concept of motherhood and the moral code of the artist. It introduced Magnolia Kanaranzi, literature’s next great female villain, and an ensemble cast of quirky characters, including the lovable and comic Barca, Blethen’s faithful golden retriever.

I’ll keep you posted as the book makes its way through the publishing process, and give more insights about the story behind the story, in the weeks and months ahead.

Cloud Warriors will be available to the public in both softcover and eBook on February 22, 2019. You can pre-order on Amazon or at John Hunt Publishing or through this website.

For a recent reviews click on the Cloud Warriors tab in the tool bar, scroll down and click on “read reviews”. If you’d like a pre-release copy for review purposes, please go to the CONTACT tab of this web site.

Check back weekly for Rob’s musings from Middle Spunk Creek.

1 Comments on “The View from Middle Spunk Creek”