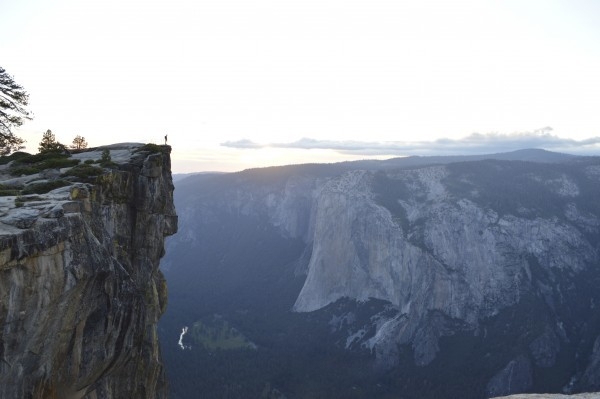 Denizens of Middle Spunk Creek, I’d like to introduce you to an old friend, and today’s guest blogger, Barefoot Bud. Bud was born with one foot in Middle Spunk Creek Mud.  After discovering that he wasn’t a muskrat (I think that was about age 12), he learned to wash behind his ears like his mother told him. His dad told him to get a job. He did that too. Now, having recovered from a career in quality management, Bud again has one foot in the Middle Spunk Creek mud. He tends to wander about with a camera around his neck and a far-away look in his eyes. Occasionally he writes about what he sees through his camera lens. Today, we are blessed by one of those times.

Hi Rob Jung fans. Barefoot Bud here. I’m a long-lost friend of Rob’s. We go way back. In our younger days we spent a lot of time exploring the world. Well, our world anyways, that is the world of Middle Spunk Creek. We may have been a bit naïve back then. We were so unaware of the rest of the world that we hardly knew of the existence of places an hour’s drive away. Heck, it never occurred to us that if we lived in Middle Spunk Creek, there must be an East Spunk Creek and a West Spunk Creek, say anything about a place called St. Paul. Then again, I supposed it is just as well we didn’t bother ourselves with such ponderings since in all these years I still have found neither the east branch of Spunk Creek nor the west one.

Oh, the stories I could tell about those days. Although most of them would be either too embarrassing or too boring to tell here, I should tell you about some of Rob’s earliest inventions though. When we were teenagers, Rob’s dad bought a plywood boat. It was a beauty with a shining new 25 horse Evinrude outboard motor. Rob’s dad, being a trusting soul, allowed us to take the boat out on our own. Well Rob made two inventions that day. He figured if you strapped boards to your feet you could stand on the water and let the boat pull you around. And it worked! Of course, when he was water-sliding someone else had to drive his dad’s boat. That someone was me. As I drove the boat pulling Rob along on his boards, I happen to drive perilously close to a semi-submerged tree trunk. I missed it with the boat but Rob… well that’s when Rob invented para-sailing! You see the swim trunks we wore back then were sorta baggy. When Rob went airborne his shorts ballooned to epic scale. He set a distance record that would be unchallenged to this day. Alas, it was just the two of us on the water so none of this could be confirmed.

But enough of that, for now. Here’s one of those camera-carrying wanders Rob said I’d do from time-to-time. I call it: 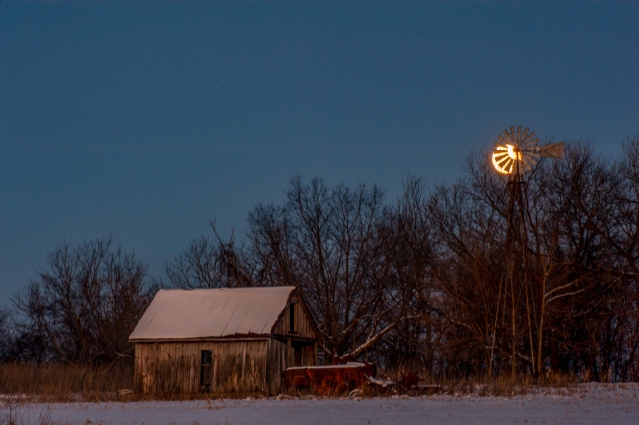 As dusk descended into darkness on a frigid January evening I quickly parked my truck along the edge of a narrow country road. With little time to waste I hurriedly mounted my camera on its tripod, pulled my microfleece cap over my ears to protect them against the subzero temperature, and rushed out into the stubble of a harvested corn field.

I knew I needed to move quickly. I had done this before and it hadn’t gone well. This time I was better prepared. I had already anticipated the camera settings I would need to capture the image I was after.  Although the previous attempt was one day more than eight years earlier, almost to the minute, I remembered how little time I had to set the tripod, position the composition in the viewfinder, and release the shutter before the moon’s position relative to the windmill would change resulting in an imbalanced image.

I felt like I was chasing the moon across the frozen surface of a snow-covered corn field. I got a few decent shots before my fingers refused to function, but I know the money shot is still to be had. I’ll have to try it all over again. Hopefully it won’t take me eight more years to do it. 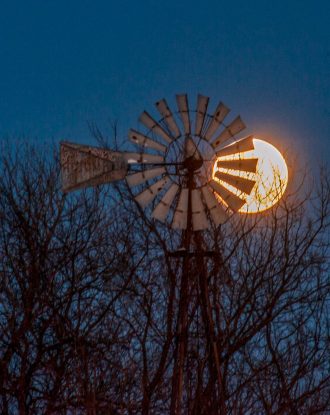 Check back weekly for Rob’s musings from Middle Spunk Creek.

#21  Almost at the Starting Gate

12 Comments on “The View from Middle Spunk Creek”