Out of Nowhere, a Memorable Character

Whether you’re a reader or an author, you get attached to characters. It’s why 6 out of 10 on the Top Ten lists of books are series. You know: Clammy Hands, 17th book of the Detective Elmer Fudpucker series.
Seriously, characters like Michael Connelly’s Hieronymus Bosch;  Brian Lutterman’s Pen Wilkinson, and Matt Goldman’s Nils Shapiro, keep us coming back to their novels. Plot may drive the story, but characters keep bringing us back.
As a fiction writer I, by necessity, create characters. but as an author who writes by the seat of his pants (a “pantser” in the trade) I stumble over characters from time-to-time, as the story requires.  One of those characters is Henri (pronounced On Ree) Hawke, a Frenchman who lives in Barcelona, Spain.
Hawke first appeared in The Reaper when Magnolia Kanaranzi needed a “fixer”.  A criminal defense lawyer by training, Hawke regularly slithers over to the dark side, doing things that strict adherence to the canons of legal ethics would forbid. When he first came upon the scene, I thought it would be a cameo appearance.  But the rotund little fellow with pomaded hair and a taste for the exotic, stuck around.
He’s become a fixture in The Sower, worthy of a nomination (along with St. Paul Police Sargent Bob Decker) as Best Supporting Character.
I often have someone in mind when forming my characters, but Hawke was an outlier. Both erudite and ruthless, he has so many more facets (as can be seen from the scene from The Sower, below). Now, if I had to cast him in a movie, I would want Danne DeVito to play the part.

‘LEST YOU THINK THIS IS ALL FUN AND GAMES 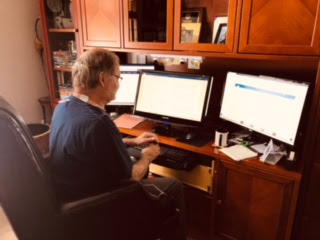 Author hard at work here, putting the finishing touches on The Sower.

Note the concentration, the beads of sweat, the tag on the outside of his shirt because he put it on inside out.

***
Here’s that promised excerpt from The Sower, featuring Henri Hawke:

Four a.m. was his favorite time in Barcelona. The club action was at its crescendo. La Rambla was packed with tourists, young professionals and the occasional veteran clubber like Hawke. By this time, his evening buzz firmly in place, Hawke would be dancing with some lithe twenty-something at MOOG or Marula Café.  Barcelona, or at least Hawke’s part of it, didn’t sleep until after 6 a.m. Little wonder that he didn’t hear his phone ring until he sat at a café table, his shirt wringing wet under his blue blazer and sweat oozing from every pore from his exertion on the dance floor.

“Hawke,” he answered. He listened.

“I’ll be in Boston Monday. I’ll call you when I know what time I’ll be in.”

He hung up, wiped his forehead with a napkin, took a sip of his Pernod and scanned the room for potential dance partners.  Hawke was a legend in the Barcelona clubs. Despite his short stature and rotund shape, he was a superb dancer, and the generosity with which he occasionally rewarded a partner added an air of mystique and anticipation. By 4 a.m. he could have his pick of partners, woman or man.

Tonight he had a tennis bracelet of white sapphires in his jacket pocket. He had not yet found the deserving evening’s partner upon which to bestow it. The DJ spun another disc. Hawke took a small mirror from his purse, patted down his slicked back hair and dabbed away the sweat.

A woman he guessed to be in her thirties, clearly a tourist by her dress, was standing with two younger women.

“American?” he asked as he approached the trio.

“Shall we dance?”
“How did you know I wasn’t from here?” she shouted above the music as they gyrated on the dance floor.

“Your dress is not so short nor so tight as the local women,” he shouted back. “You are much more urbane. You are a woman among children.” She blushed but did not walk away when the music changed. They continued dancing until they were both breathing heavily, then Hawke walked her to the table where her two companions awaited.  He made a deep bow and kissed her hand.

He took the bracelet from his pocket and placed it in her hand.

“For honoring me with a dance, I give this to you. And for you,” he continued, turning to her two companions, “another bottle of wine.” He signaled to a nearby waiter.

“I can’t accept this,” said a shocked Marta. “This is beautiful, but…”

“You have just danced with the great Henri Hawke,” the waiter said, arriving at the table. “You cannot turn down a gift from Mr. Hawke. His reputation, and the reputation of The MOOG, would be tarnished. Surely you don’t want that.”

“Thank you,” she said, breathlessly.

“My pleasure,” Hawke bowed his tilted head. “A bottle of Poggione Brunello for ladies,” he said to the waiter. “My tab.”

Keep track of Rob’s books; meet the characters up close and personal; get the backstory behind the stories; enjoy games, contests, freebies and specials; just by following Rob’s  blog: The View from Middle Spunk Creek.